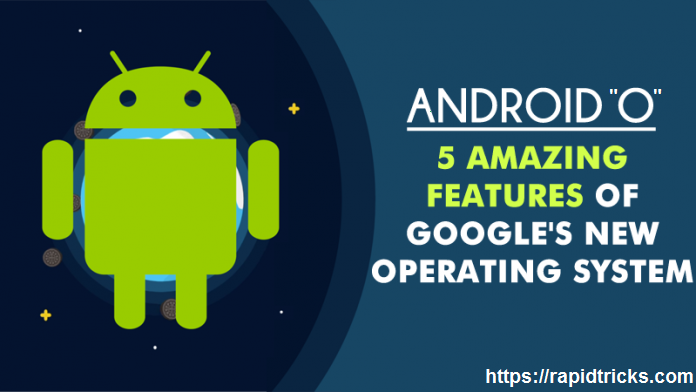 Today in this article we are going to talk about the 5 Best Features of Googles New Operating System Android O. Google is soon going to launch their New Android operating system Android O. However, the Android O is still in the testing phase.

Android O might not be the official name of Google’s new operating system. it might be I/O, but currently, it is Android O. So now let’s see, which are the 5 best features of Android O.

The background limits for the apps has been put in three areas namely the Background services, location updates and Implicit broadcasts.

This feature is supposed to give the users “control on the different type of notifications. The customers now can block or change how each channel behaves.

There is also a new user interface and grouping of notifications, and this will let users take a glance at the notifications more easily.

The PiP mode will allow users to watch videos, browse contents or do anything else while watching the video through a small box inside the phone’s screen.

This feature is similar to the Youtube background function for phones. When you press the back button the Youtube videos play in a small size box. This feature also allows the users to set the aspect ratio and custom interactions in the PiP mode.

As the name suggests “Autofilling,” this new feature of Android “O” will make the filling of online forms very easy and quick. The Autofill app will store the user’s data including the email ID, Address, Password, credit card number, etc.

The Autofill app will store the user’s data including the email ID, Address, Password, credit card number, etc. Securely into the device. So when a user needs to fill any online form, then they can autofill the fields stores in the Autofill app.

So these all are the top 5 amazing features of Google’s new operating system Android O. How much you would rate these amazing new features of Android “O”? Tell us in the comment section below.